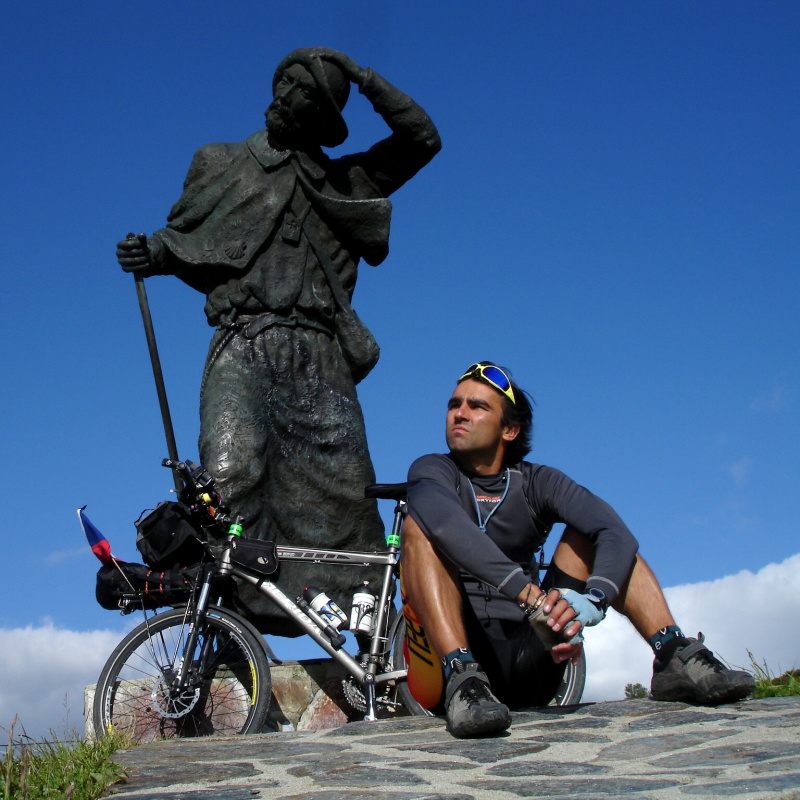 Born in „late socialism“ period. Currently livind in Rokytnice u Přerova. VRaised together with his older brother in a lovely caring family, which positively formed his personal development. After high school he worked for Czech Railways and Telecom but his mother’s genes were pushing him to travel and explore. For some time he lived in Southwest France which changed his live for ever. After his return to Czech, he started a popular music band D.U.Bmusic and formed a musical-theater association, D.U.B company. In the year 2000 has discovered the beauty of traveling in the seat of his bicycle.

Till this day he ride several times through the Europe by bike. His biggest success was his journey to Santiago de Compostela.. When he came back home, he gave a lecture about his journey and was a guest on Czech Television. He is also a successful cyclist on mountain bicycle race and he also got through very difficult race, the Salzkammergut Trophy. At the moment he is getting ready for his expedition Trans - Canada Bike 2010, which should start at the end of May 2010. He is riding a Merida bicycle. Pavel works as a technician for Toom interior company s.r.o. in Přerov. He is married, has no children. He LOVES life!.

"..Hi. My name is Pavel Kadlicek. I’m just an ordinary person. Somewhere inside I'm the globetrotter, who traveled all around the world more than five times - always after switching off the light on my bedside table. Real globetrotter has maps in the library. I have maps even in my toilet. For all cases I have there also Atlas of Europe. You never know. I'm demoniac cyclist and passionate musician, which is explosive mixture for the soul of globetrotter. I explore the world in the seat of my bike and music incubate in my head from the feeling of pleasure. My hobbies actually complete each other. So, I'm just fine."

How far is Pavel already
Vancouver